As a chiropractor, I recognize that the nervous system is the conduit of transmission for all life expression. The acclaimed chiropractor Dr. Christopher Kent relates this idea in his lectures (slightly paraphrased here). “Everything we experience is processed through our nervous system,” he says. “If our nervous system is not functioning to its optimal level, our perception of the world is distorted and our ability to respond appropriately is compromised. This not only affects our physical health, but also our emotional and psychological function as well.” 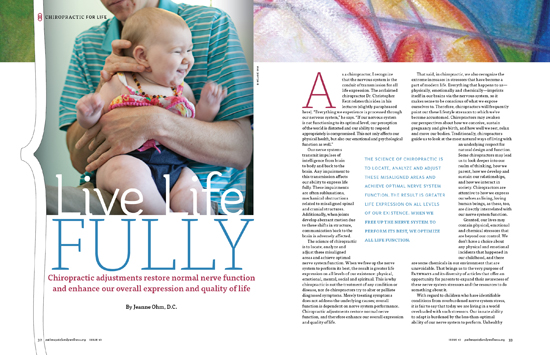 Our nerve systems transmit impulses of intelligence from brain to body and back to the brain. Any impairment to this transmission affects our ability to express life fully. These impairments are often subluxations, mechanical obstructions related to misaligned spinal and cranial structures. Additionally, when joints develop aberrant motion due to these shifts in structure, communication back to the brain is adversely affected.

The science of chiropractic is to locate, analyze and adjust these misaligned areas and achieve optimal nerve system function. When we free up the nerve system to perform its best, the result is greater life expression on all levels of our existence: physical, emotional, mental, social and spiritual. This is why chiropractic is not the treatment of any condition or disease, nor do chiropractors try to alter or palliate diagnosed symptoms. Merely treating symptoms does not address the underlying causes; overall function is dependent on nerve system performance. Chiropractic adjustments restore normal nerve function, and therefore enhance our overall expression and quality of life.

That said, in chiropractic, we also recognize the extreme increases in stressors that have become a part of modern life. Everything that happens to us—

physically, emotionally and chemically—imprints itself in our brains via the nervous system, so it makes sense to be conscious of what we expose ourselves to. Therefore, chiropractors will frequently point out these lifestyle stressors to which we’ve become accustomed. Chiropractors may awaken our perspectives about how we conceive, sustain pregnancy and give birth, and how well we rest, relax and move our bodies. Traditionally, chiropractors guide us to look at the most natural ways of living with an underlying respect for natural design and function. Some chiropractors may lead us to look deeper into our realm of thinking, how we parent, how we develop and sustain our relationships, and how we interact in society. Chiropractors are attentive to how we express ourselves as living, loving human beings, as these, too, are directly interrelated with our nerve system function.

Granted, our lives may contain physical, emotional and chemical stressors that are beyond our control. We don’t have a choice about any physical and emotional incidents that happened in our childhood, and there are some chemicals in our environment that are unavoidable. That brings us to the very purpose of Pathways and its diversity of articles that offer an opportunity for parents to expand their awareness of these nerve system stressors and the resources to do something about it.

With regard to children who have identifiable conditions from overburdened nerve system stress, it is fair to say that today we are living in a world overloaded with such stressors. Our innate ability to adapt is burdened by the less-than-optimal ability of our nerve system to perform. Unhealthy nerve performance leads to nerve stress overload, which leads to more unhealthy nerve performance, which leads to more nerve stress overload. The cycle is impairing and distorting the life expression of entire generations. Again, let’s remember Dr. Kent’s lecture: “Everything we experience is processed through our nervous system. If our nervous system is not functioning to its optimal level, our perception of the world is distorted and our ability to respond appropriately is compromised. This not only affects our physical health, but also our emotional and psychological function as well.”

Throughout this issue (as in every issue of Pathways), I hope to awaken our appreciation for the nervous system and its enormous effect on our lives. I hope to expand our understanding of how chiropractic care enhances nerve system function. Whether you’ve been diagnosed with ADHD or not, here are my suggestions:

Step One: Get your nervous system performing at its best with chiropractic adjustments. This is the essence of natural, sustainable health and well-being. This is at the core of expressing all aspects of our lives at their greatest potential.

Step Two: Look at the many lifestyle choices that are offered in Pathways, and consider what you can change about your own life. Reducing physical, emotional and chemical stressors will strengthen your nerve system’s ability to experience and manifest life more fully. What chiropractic offers is not the treatment of conditions or the mere easing of symptoms, but instead restoration of nerve system performance, which affects physical, social, emotional, mental and spiritual expression. There is a difference.

Step Three: As your nerve system begins to perform with greater ease and expression, notice the shift in your perspectives. Allow your consciousness to expand. And then, most important, regardless of others’ desire to stifle your innate potential to express who you are, allow yourself to live life fully!

“ Everything we experience is processed through our nervous system. If our nervous system is not functioning to its optimal level, our perception of the world is distorted and our ability to respond appropriately is compromised. This not only affects our physical health, but also our emotional and psychological function as well.” —DR. CHRISTOPHER KENT

Several years ago, a fellow doctor of chiropractic handed me a book titled Report of State Supervisor of Chiropractors of Kentucky: In Connection with Kentucky Houses of Reform. It was a compilation of letters of appeal to the state of Kentucky for the purpose of funding full-time chiropractic services in these types of reform schools. It contained the health records of 244 of the boys in a Kentucky reform school and the marked improvement they experienced under chiropractic care.

On September 3, 1930, two doctors of chiropractic, Lillard T. Marshall and C.A. Combs, began working at the Kentucky Houses of Reform in Greendale. For 15 months, the doctors provided chiropractic adjustments to 244 boys in the reformatory. The published data was recorded by the chiropractors and approved by 10 members of the reform school’s administration and faculty.

During those 15 months, 155 boys of the 244 had their initial ailments alleviated and were dismissed from care. Some of the symptoms that resolved under care were the musculoskeletal pains and headaches that most people associate with chiropractic care. However, other conditions were also resolved, including enuresis (bedwetting), digestive and elimination disorders, kidney and liver malfunctions, blood disorders and epilepsy. Most significant, however, and most pertinent to this issue of Pathways, was the marked result chiropractic care had on the behavior of these boys. Fifty-four of the boys were promoted in grades, and almost all of them showed improvement in conduct. Paroles are based largely upon conduct, and the report shows that 144 patients (almost 60 percent) were paroled after receiving chiropractic care. Superintendent B.W. Hubbard noted that “there has been a larger number of paroles during that period than any previous period during the past four years.”

S.E. Duff, the institution’s director of education, wrote, “Allow me to say that I feel that the fine showing in the number of promotions and dismissals from the institution is largely attributable to the very excellent work done by the chiropractors, who have almost daily looked after the health and general welfare of these boys. The general tone, the mental alertness and moral and social outlook of these boys have in a large measure been attributable to this very fine cooperation.”

Kentucky Houses of Reform chaplain Dr. J. Archer Gray attested, “I stand ready at any time to go before anybody and tell my views, which, if carried out, would result in better health of the boys and girls, they would show better record at school and in the shops, and their moral life would be improved 100 percent almost at once.”

The decade before, chiropractic had also showed great promise with several mental health facilities in Davenport, Iowa. In 1922, the Chiropractic Psychopathic Sanitarium was established. The facility was later known as Forest Park Sanitarium. North Dakota judge A.W. Ponath championed the cause for chiropractic for mental illness. He noted that at the North Dakota state mental hospital, the “cure and discharge rate” ranged from 18 to 27 percent, compared to 65 percent at Forest Park. Decades later, in 1951, W. Heath Quigley, D.C., was appointed sanitarium director, and is credited for advancing the bulk of the work there. In his paper titled “Pioneering Mental Health: Institutional Psychiatric Care in Chiropractic,” he wrote, “It was a deeply rewarding experience to watch an extremely agitated, delusional patient respond to chiropractic adjustments to become manageable within a week to ten days and well enough to go home within a month to six weeks.”